BART needed parking at the Fruitvale station in Oakland, California to replace the surface parking lost to a neighboring housing and commercial development. Only one small parcel of land was available just north of the station and C. Overaa & Company and Watry Design were selected to design and build a parking structure on this property.

The resulting 5-level parking structure contains 508 parking stalls in 156,000 square feet, which provide convenient parking for patrons of the Fruitvale station. Several bus canopies for the intermodal facility between the station and the parking structure were also included in the project.

The project was the recipient of the 2006 ACI Construction Award for the Architectural Category.

The Benefits of Understanding the Parking Lifecycle

Mixing It Up: What You Need to Know About Supporting Mixed-Use Development with Well-Integrated Parking

Parking Today: The Passenger Experience Begins Before Entering the Airport 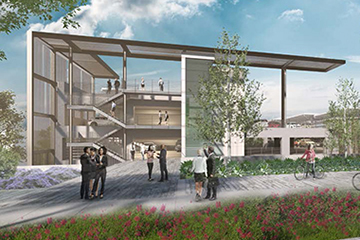